Where the Wind Blows

Wind Watcher
January 2018 in General
Ever wonder where the wind blows……. 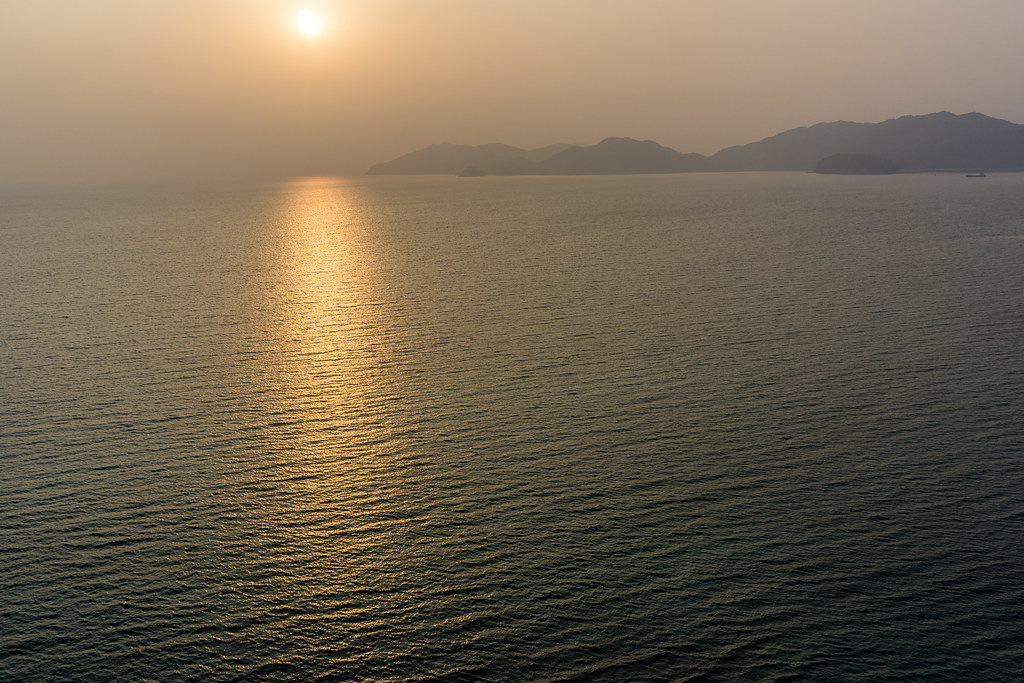 If you could talk to the wind and carry on a conversation…. what stories would the wind tell? What color is your wind…. The color of my wind is “absent” as in no wind. The past few months the absence of wind combined with a tight work schedule and short winter days had reduced my passion for Kite Aerial Photography (KAP)….My wind stories have also been silenced….waiting for the wind…..

The itch for flying kites and KAP still is ever present…. My eyes constantly search for signs of wind …. a rustle of a leaf, wisp of smoke, ripples on the water……and for opportunities to stick my kites into the wind in the skies above…..sometimes to the peril of my kites and KAP rigs!

A push to fly found my Levitation Light delta kite in the winter night skies above Boston harbor….only to find a sudden kite dive out of the night sky….. followed by a dunking of my KAP rig and Sony A6000 camera into the icy saltwater of Boston harbor. The kite recovered and pulled back into the night sky but not before dumping the KAP rig into the saltwater and destroying my Sony A6000 with the 20mm lens. 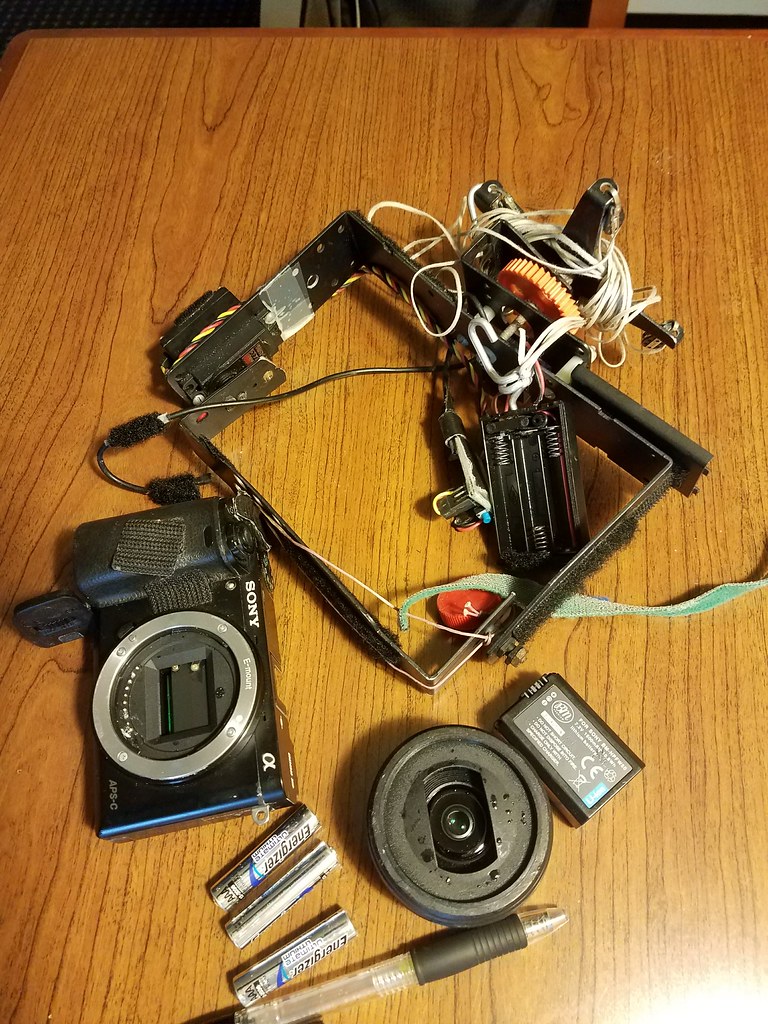 Recent trips to Japan (Osaka) and Poland (Warsaw / Lyszkowice) resulted in limited KAP opportunities do to absence of wind (and short days with weak winter light). I did get in one short evening KAP session over Osaka on the back end of a typhoon (too much wind….).

A few weeks passed…..where I licked my wounds….as I rebuilt my KAP rig. I purchased a new Sony A6000. I purchased a new Sony 20mm prime lens. The CAMRemote controller was also replaced. I was able to reconstruct and save the servos and battery case. The KAP rig was slowing coming to life and going through static testing on the ground. I took the opportunity to tune (speed up) my auto KAP pattern in the CAMRemote controller. Now just needs some wind and time to test everything out. 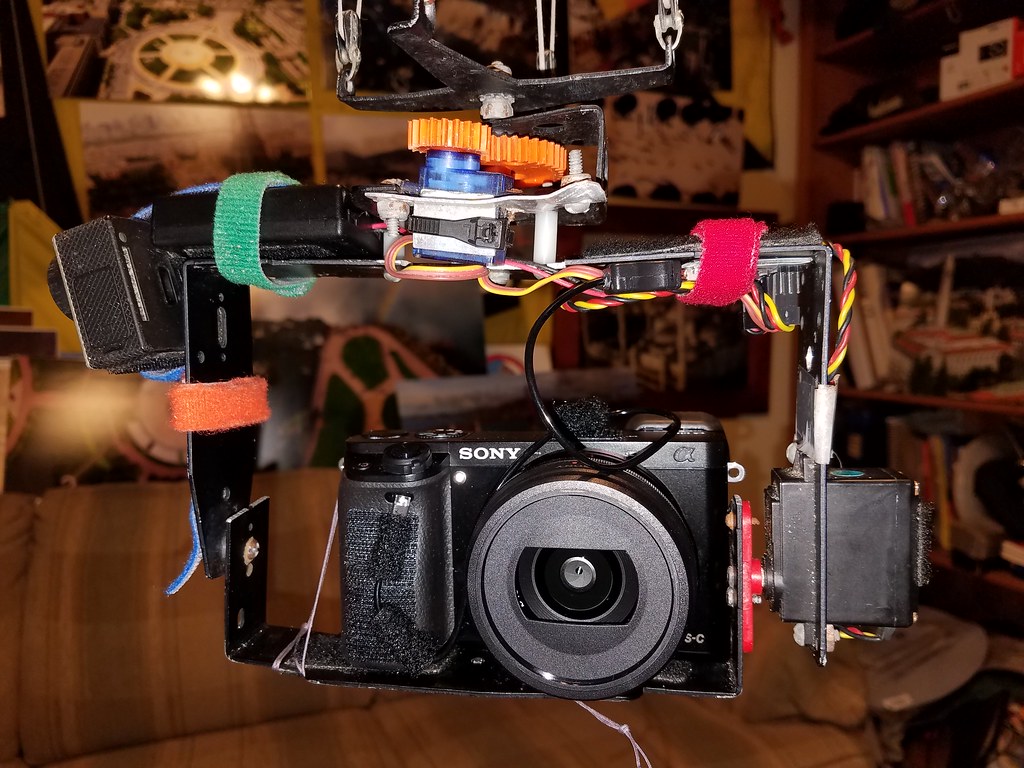 A return trip to Japan was on track to repeat the same sad story …. No wind ….. short winter days ….and too much work…. The forecast was for light and variable wind…. combined with a fully loaded work schedule… My hopes were low for any KAP on this trip to Japan. My eyes kept wandering to the windows looking for any whispers of a wind kicking up.

A local regional airline (Jet Star) unexpectedly forced me to check my carry on kite bag…..first time in over 200 airline flights….. on my final flight from Tokyo to Osaka. I had a fear of heavy bags falling on my strong but delicate wrapped carbon fiber Skyshark tubes that I used to frame my kites…..hidden defects (small cracks in the Skyshark tubes are hard to detect!). The bundle of kites where just in a soft kite bag with no protection other than the kites themselves!

Five days passed in Japan. No wind. Very little light. Lots of work….. I did scout out a few potential KAP locations for future flying….

The color of my wind changed from “absent” to 10 mph out of the South West….on my last day in Japan…..now if I could just figure away to adjust my work schedule…. Sometimes the stars and the wind line up and such was the case on this fine afternoon as my work wrapped up on time…..with a couple of hours free prior to boarding the Shinkansen bullet train from Yokakama to Osaka. The Shinkansen is a national network of fast "bullet trains" run by Japan Railways. These trains are sweet, fast and quite to ride. The maximum speed of Shinkansen is 240 to 320 km/h (150 to 200 mph) depending on cars and lines. Yes – fast movers indeed.

A few minutes later I was dragging my check bag , brief case and kite bag across the beach in my dress shoes and clothes (a few of the locals gave me quite a look….). If they had asked (in English) I would have responded…. “Chronic Kite Fever!” I quickly pulled my Stratospool out of the checked bag. Next my Levitation light delta kite fitted with a dynamic spreader was quickly set up and attached to the kite line. A few minutes later and the kite was flying at about 100 feet in the smooth wind flowing in off the sea. All the sticks (kite framing) seemed to hold with no signs of failure due to being checked by Jet Start airlines…..The Kite Aerial Photography (KAP) rig was next. The recently overhauled KAP rig included a new Sony A6000 with a new Sony 20mm prime lens. The Levitation delta was providing enough lift to attach a second camera my Hero 3 black for shooting Kite Aerial Video. Five minutes later the kite and KAP rig were at cruising altitude in the skies above Hikari Japan. 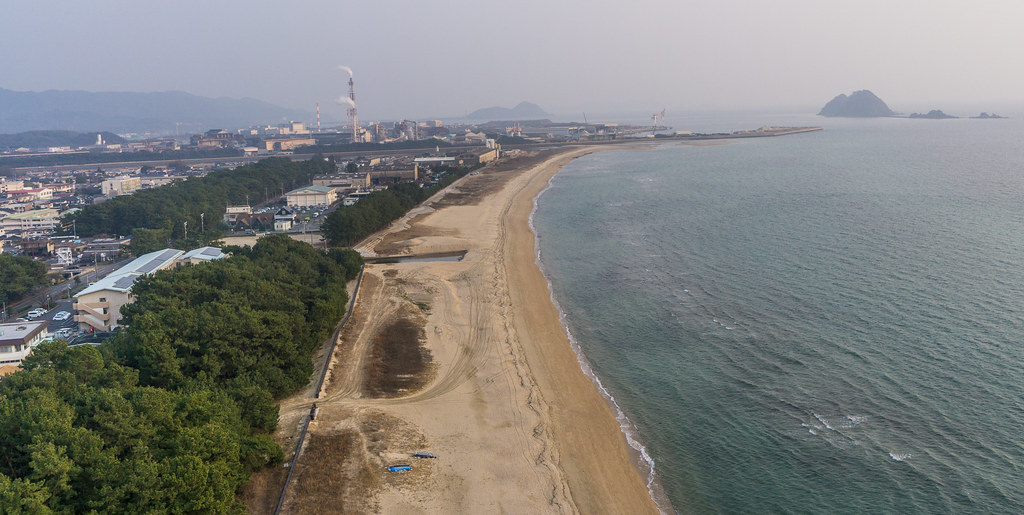 A smile returned to my face….it had been awhile (almost 5 weeks) since my last KAP flight in Boston Harbor. The calming effect of flying a kite was immediate. The scene did look a bit odd..,, a couple of suitcases sitting in the sand on the beach in Hikari with a guy flying a kite with a camera attached….

The smile lasted about 30 minutes….then the wind died down. The Levitation Light delta was unable to lift the dual camera KAP rig in the falling wind. A quick retrieval of the KAP rig came next followed by the removal of the Hero 3 to dump some weight. This provided short term relieve but the wind speed continued to drop under 8 mph….

Next up was a kite switch….I pulled the Levitation Light delta down and quickly switched to my big 10 foot BKT Rokkaku. The big yellow Rokkaku drew additional interest from the locals as the big kite lifted into the sky. The big kite is an excellent lifter even in light wind. The KAP rig quickly climbed back into the sky above and the smile returned to my face. I only had 30 minutes of time before I needed to pack everything back up and find a cab driver to take me back to my Shinkansen bullet train from Yokakama to Osaka.

A few dog walkers stopped by with their dogs on leashes to check out the excitement on the beach. I took turns holding the dog leashes while I handed off my stratospools to the dog owners. Smiles all around.

As the sun was setting into the sea off Hikari Japan I pulled in my kite down. The KAP rig was next. The wind unseeingly stopped and dumped my new camera and lens face down in the sand….. I started talking to my camera….telling it – better get use to some rough handling…..you will be flying with a guy with kite fever!

Every wonder where the wind blows? What stories does the wind carry and where do these stories end up?

Enjoy a few photos from the skies above Japan here and on flicker. 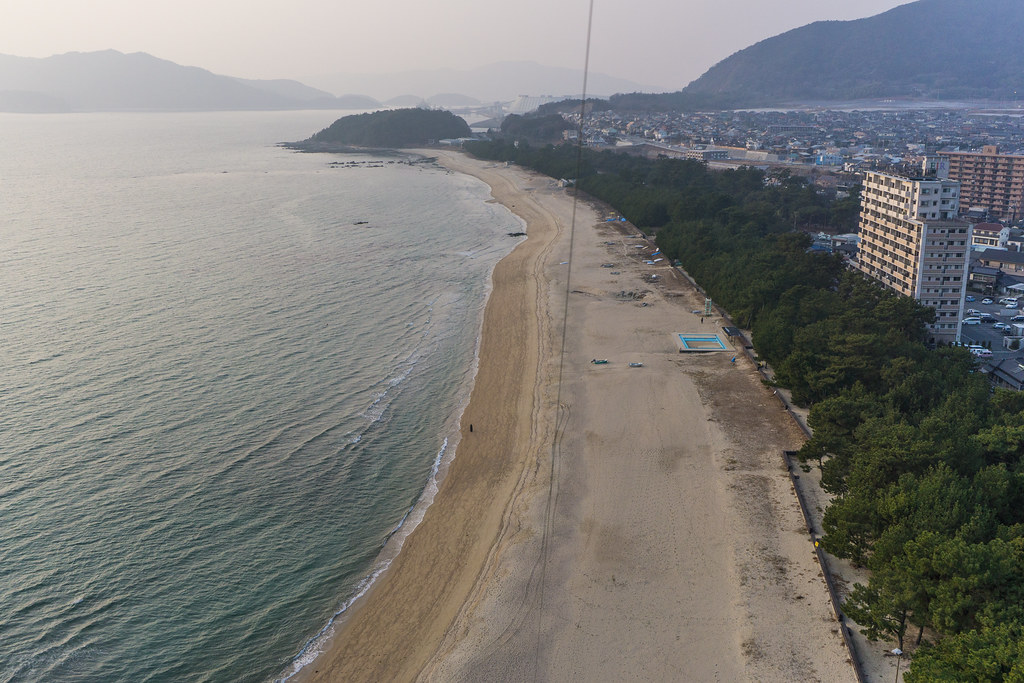 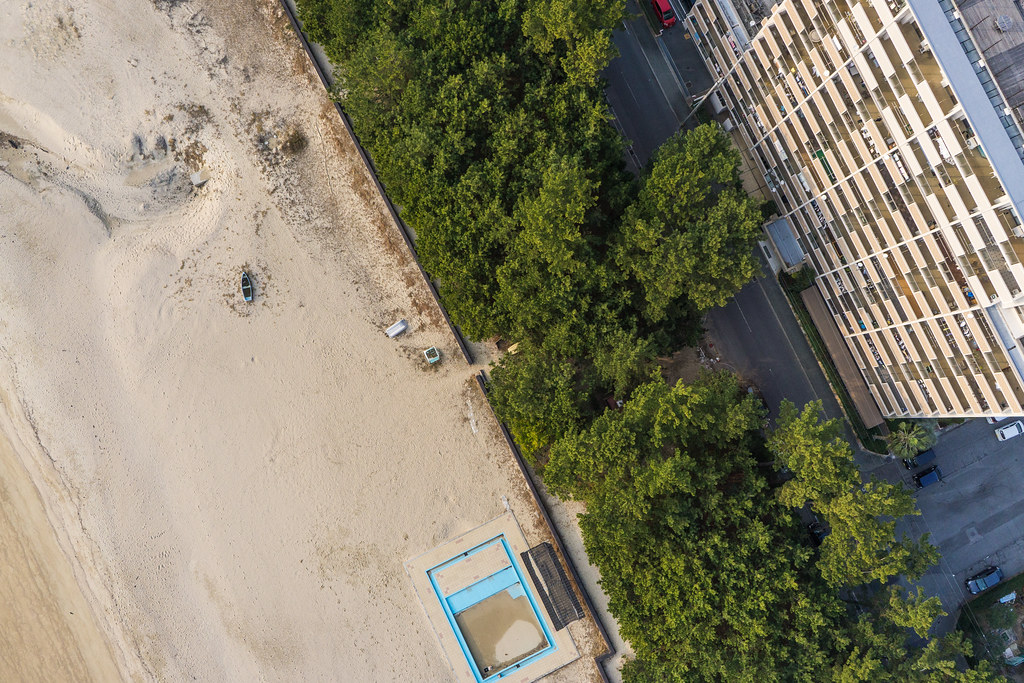 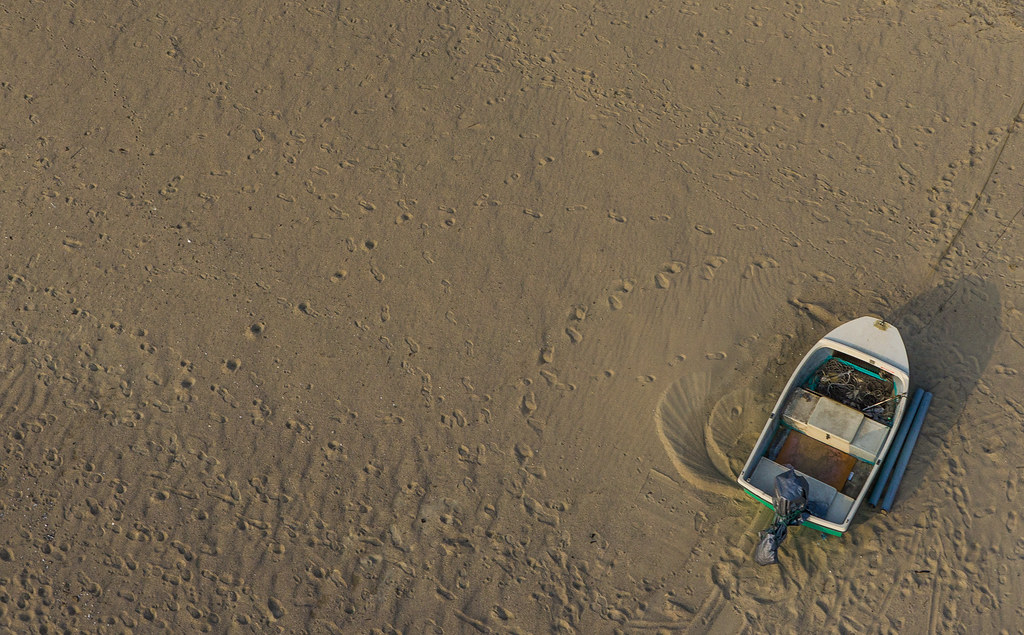