Wind Watcher
February 2018 in General
A dusty rust colored sky greeted my return to the Indian sub content. Upon reaching the airport in Vizag (Visakhapatnam) India on a Sunday afternoon after a long journey from America a hot dusty breeze greeted me and put a smile on my face….

One of the best cures for jetlag ….. is to go fly a kite….and take pictures…..and this is just what I had planned.

A 45-minute ride to my hotel on the beach of the Bay of Bengal near Visakhapatnam, India was followed quickly with a Kite Aerial Photography session on the shores of the Sea of Bengal. 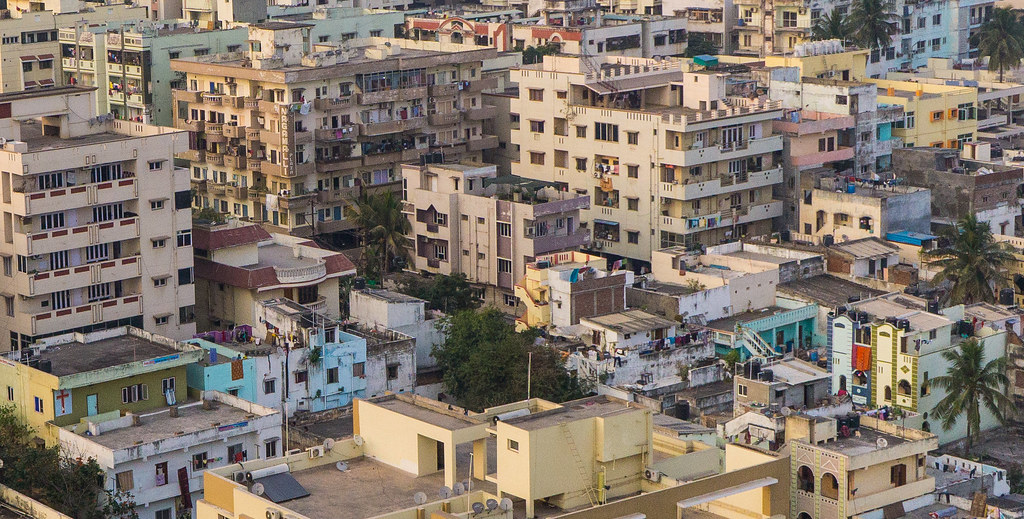 The wind was softly blowing in off the Bay of Bengal at ~ 6-8 mph with gusts reaching 10 mph. I began a short walk south along the beach looking for a good place to launch my kite. Ten minutes passed when I came across a number of children flying small 18-inch paper kites with thin cotton line. At first a few children and teenagers began to follow me….showing interest in my red kite bag and Stratospool that was strapped to my back.

I stopped a few minutes later after finding a suitable launch point. I quickly set up my Levitation Light delta on the sandy beach. The kite seemed shocking large to the children who had gathered around me with their small paper kites. The group of people mostly made up of families quickly grew and surrounded me as I fitted the spars and spread the kite wings with the dynamic spreader (DS). A simple larks head know was used to attach the kite to the kite line and Stratospool. The thin 150 lbs. Dyneema kite line was perfect for the light wind conditions. A few minutes passed as the kite quickly reached cruising altitude….. The sudden appearance of the large delta kite that was uncommon to these skies also attracted a number of spectators. 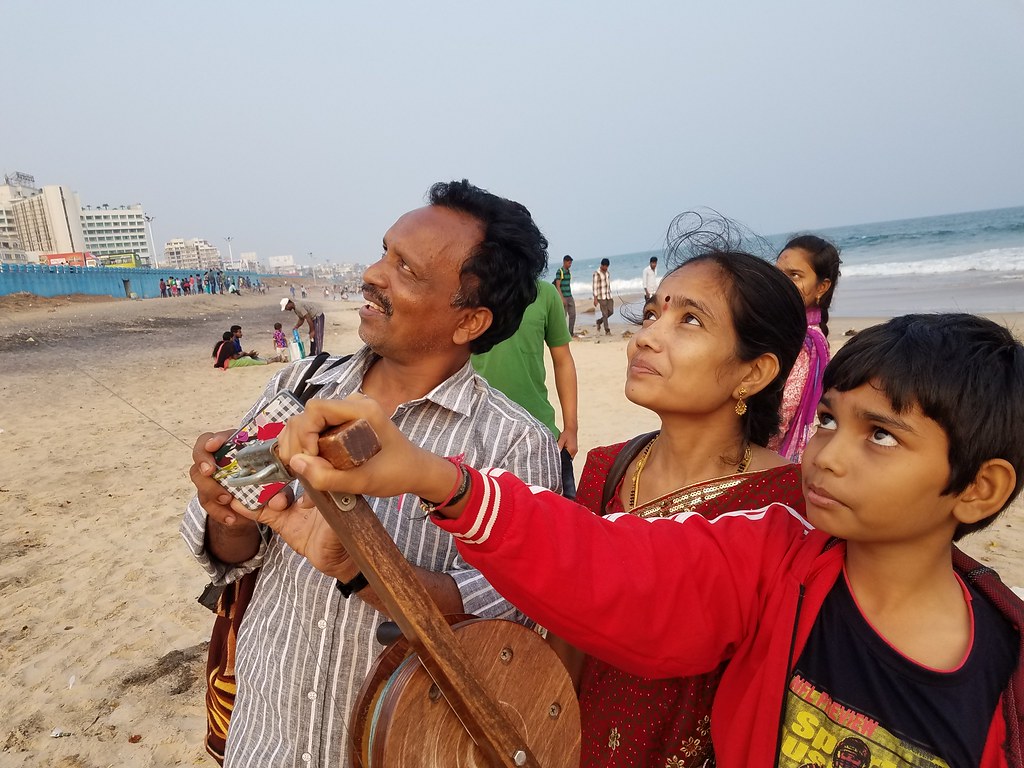 The kite was a willing flyer and was floating easily in the sky above…. but the pull on the line was not sufficient to lift the KAP rig with confidence. So….after about 10 minutes of fun kite flying….I pulled down the kite quickly with the Stratospool reel.

The children gathered around me were a bit surprised and disappointed that I pulled down the kite so quickly. Several small paper kites remained in the sky a above.

I quickly stowed the delta kite in my red kite bag….and pulled out my big BKT yellow Rokkaku kite. The BKT Rokkaku is 10 feet tall and commands your attention when standing next to it. The small gathering of kids, teenagers, young men and families quickly grew around me as I fitted the Skyshark wrapped carbon tubes in place.

The big Rokkaku kite is designed for light winds….. and quickly climbed into the evening sky. The pull on the kite line was more than enough to safely and consistently lift the KAP rig.

The small crowd was startled at the size of the Rokkaku kite and the excitement grew as I pulled out my KAP rig for setup. I let the young children hold the Stratospool (which was also attached to my waist) as I attached the KAP rig to the kite line. The Rokkaku kite quickly lifted the KAP rig into the Indian skies above the Sea of Bengal to the delightment of the children gathered around. The children were amazed at the simple pan and tilt movements of the KAP rig. 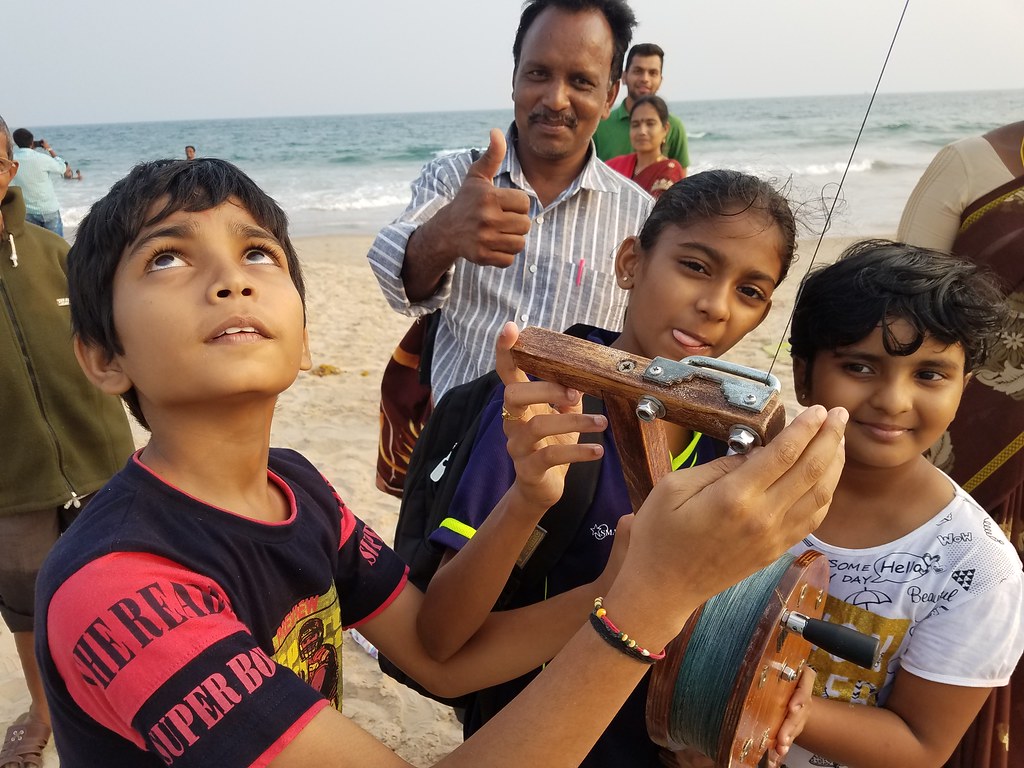 The Stratospool attracted attention as I speedily feed out kite line raising the Rokkaku kite high into the evening skies above. The light was beginning to fall with the setting sun. I had set up my newly replaced Sony A6000, 20mm prime lens with manual exposure settings for a moderately bright day…..(1/800 sec at f/ 7.1, ISO auto) but now with the rapidly falling light the auto ISO function that I used kept the exposures usable but with increasing grain at the higher ISO settings…..ISO 1000 and up. 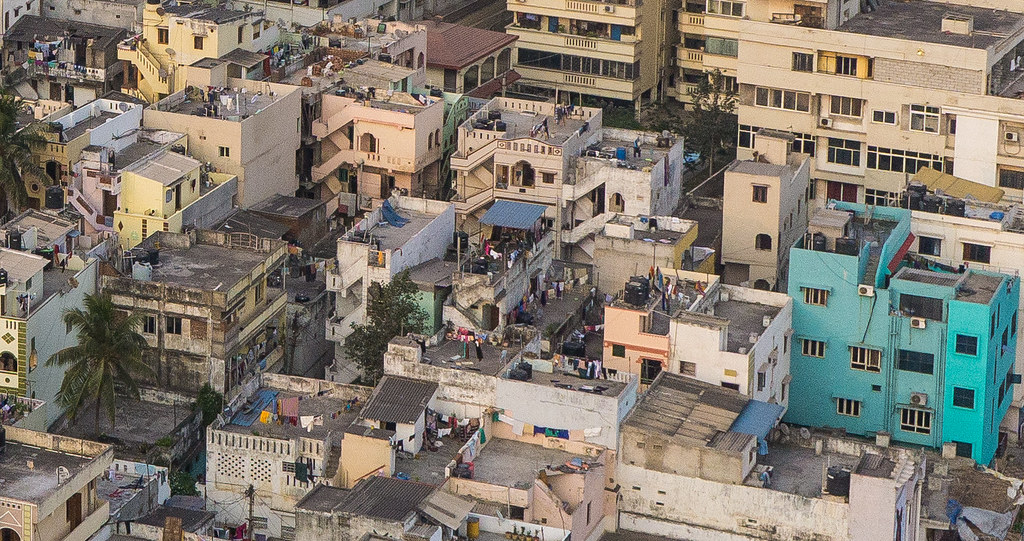 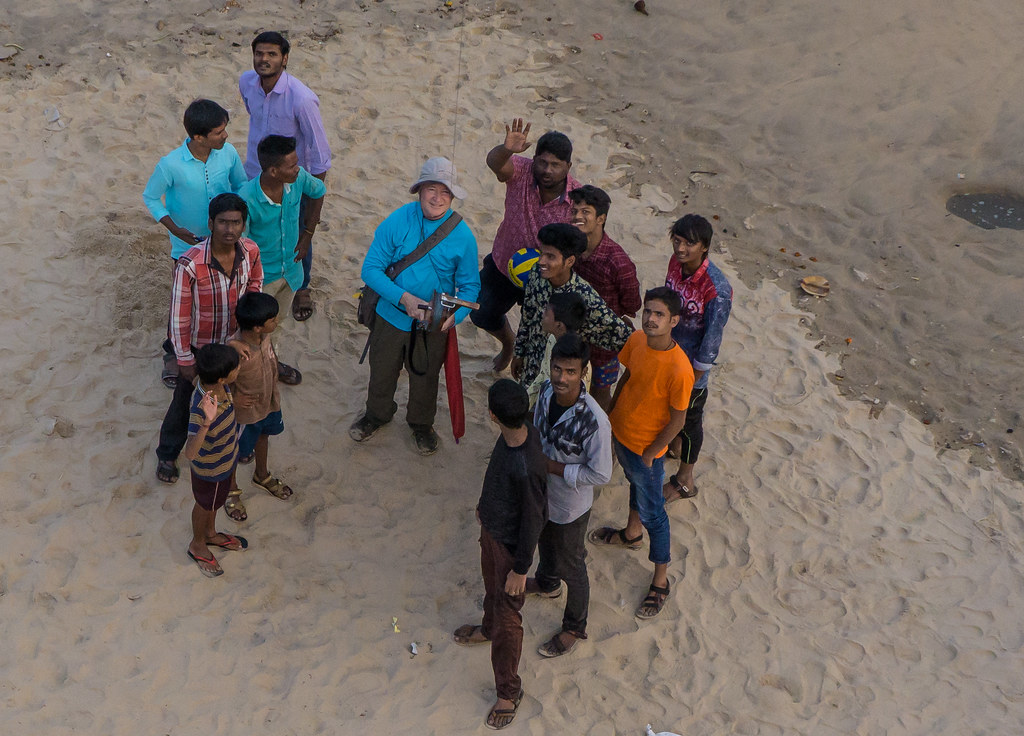 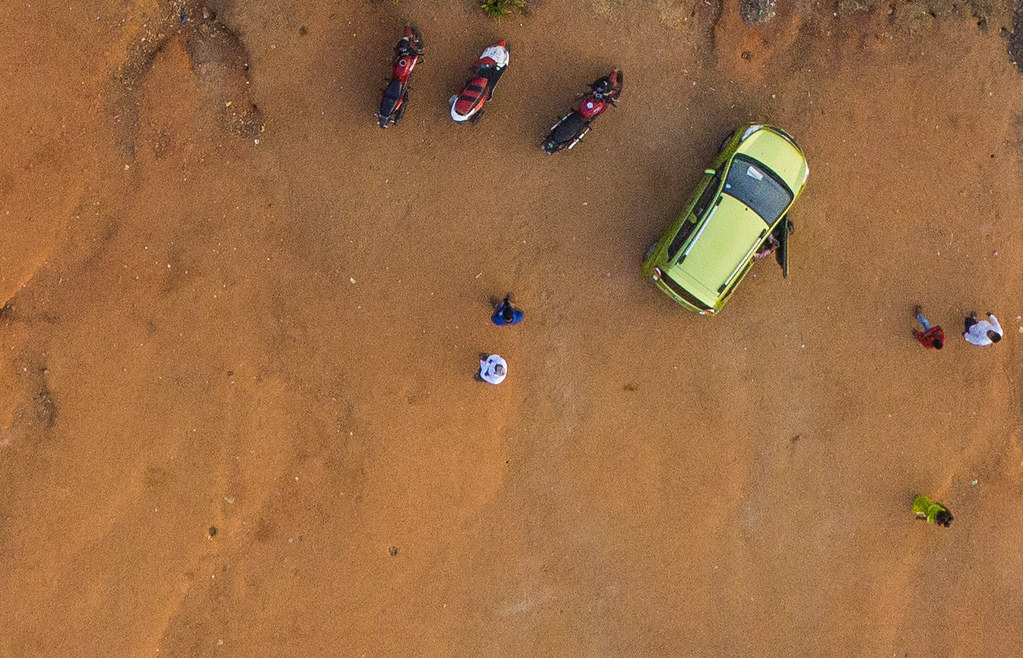 The relaxing KAP session got interesting about 30 minutes into the flight when nearby kids decided to take on the big stable 10 foot BKT Rokkaku in a kite fighting contest…. The natural fiber kite line with unknow amount of glass could be disastrous to the synthetic Dyneema kite line that I was flying. The Their two kites quickly wrapped themselves around my kite line…. The site of my KAP rig and new Sony camera floating away freely flying under the big Rokkaku kite was too much to bear. I took immediate action by handing off my Stratospool to one of the young teenagers. Next I started grabbing the kite lines from the two kites and began to carefully unwrapping them from my Dyneema kite line. No evidence of glass on the kite line thank goodness. 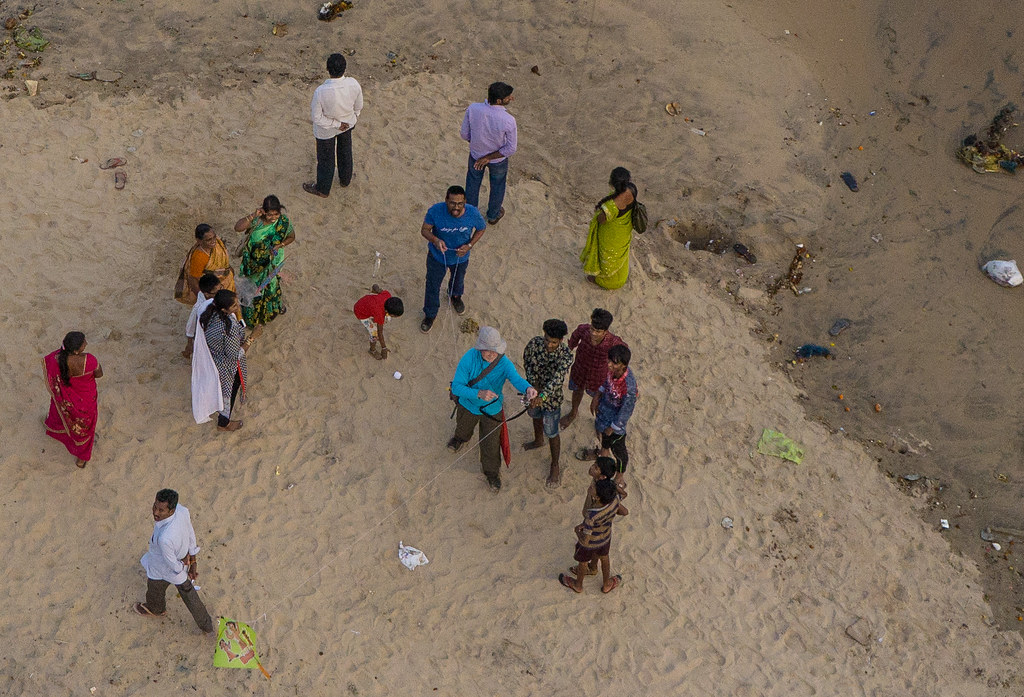 The fun KAP session resumed after the excitement of the fighting kites passed.

The small throng took turns holding the Stratospool and flying the kite until the end of the KAP session. The Stratospool quickly retrieved the kite line, KAP rig and kite from the evening sky. Once on the ground the big 10 foot Rokkaku drew interest from the spectators. At one point every inch of the big Rokkaku kite perimeter was covered by the surrounding crowd. I had to press into the group to reach the Skyshark framing and disassemble the kite. A few minutes passed and the kite was safely stashed back in it’s kite bag bring an end to a brief evening KAP session in the skies above Vizag (Visakhapatnam) India and Bay of Bengal. 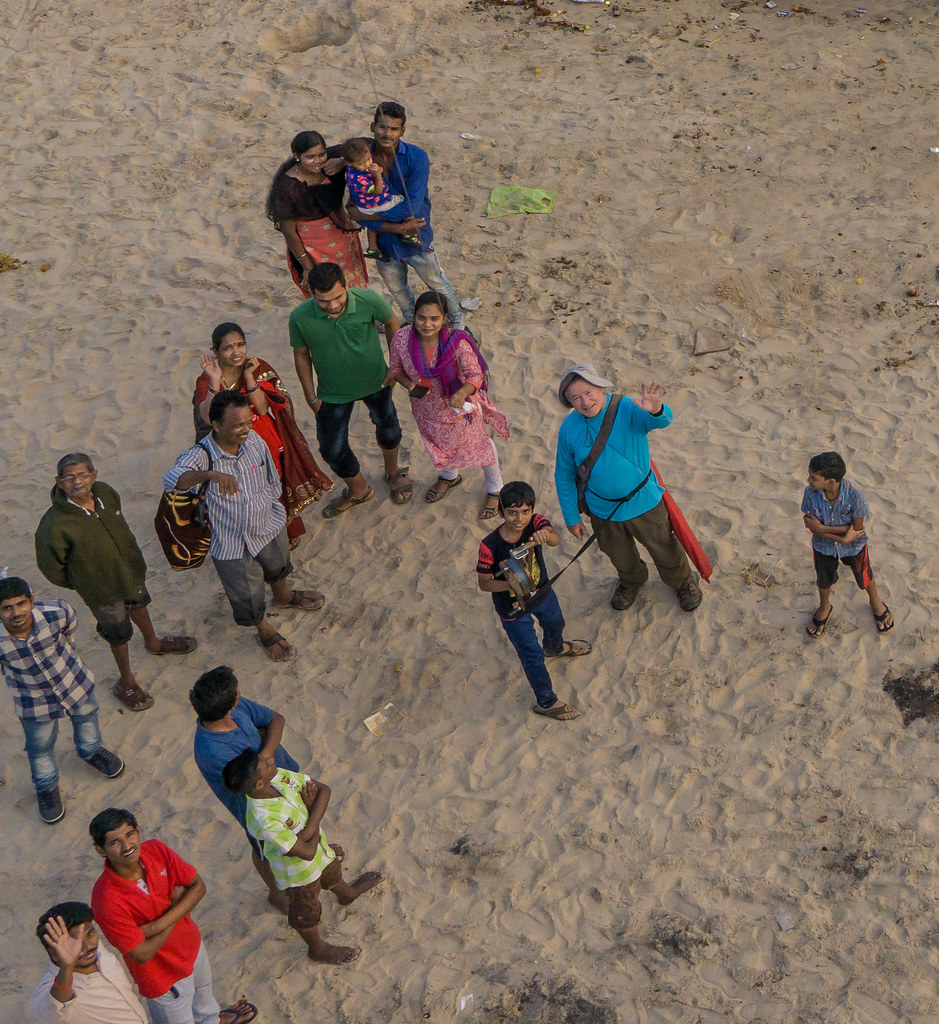 Enjoy a few pictures here and in this flickr album. 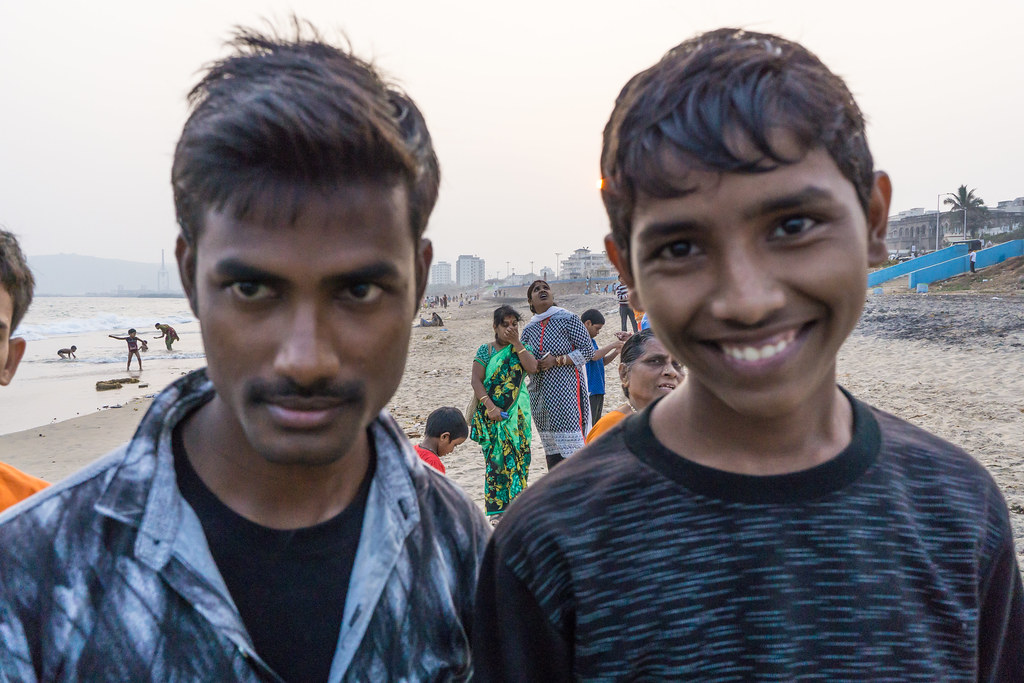