Between the Mountains and the Wind

In these winds I placed my hope …… for a bit of enjoyment after a long week of work in Switzerland and Germany. 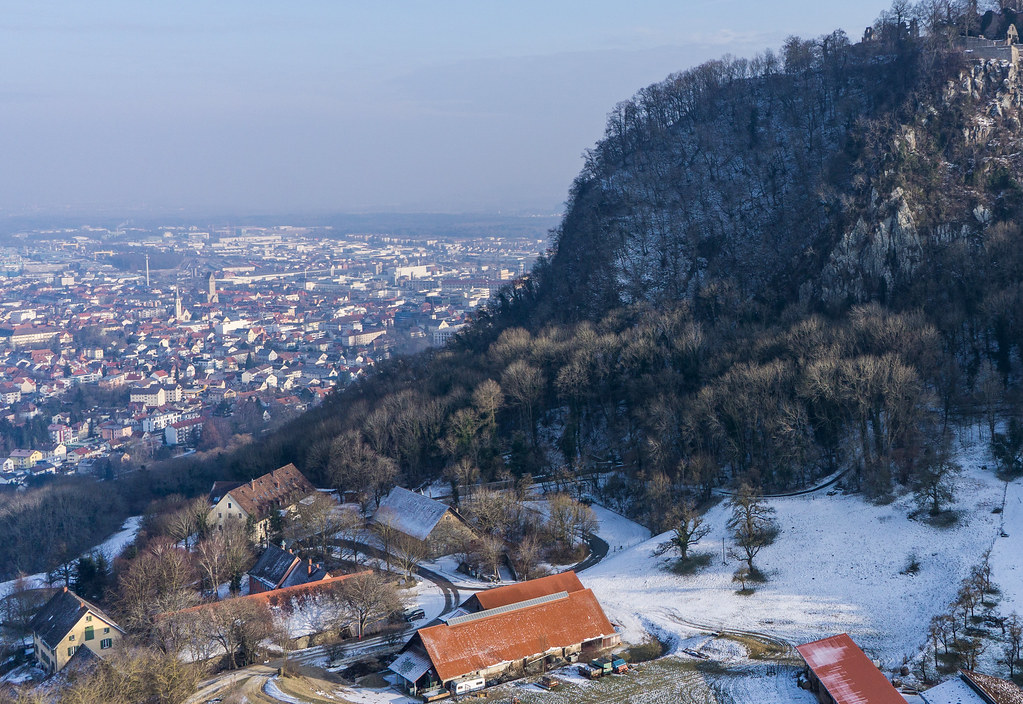 The week started cold. Upon arriving in Zurich from Philadelphia I headed for the German boarder with Switzerland. An artic blast greeted my face. British call this the Beast from the East with temperatures dipping to -15 C. Coldest days in these parts for over 100 years….even snow in Rome! Everyone was bundled up with hats and scarfs pulled tight. Gloves were a must.

The sun was rapidly slipping down as I stood on the shore of Lake Constance. The cold combined with the wind made conditions….brutal…. but….my kites live for these conditions…

This was a race against time…..try to scrape a few photos from the sky before the extreme cold shut down the batteries on the two cameras (Sony A6000 + Go Pro Hero3) and the batteries on my CamRemote controller.

A few hardy souls and a few families ventured out to see what was that strange object in the sky. 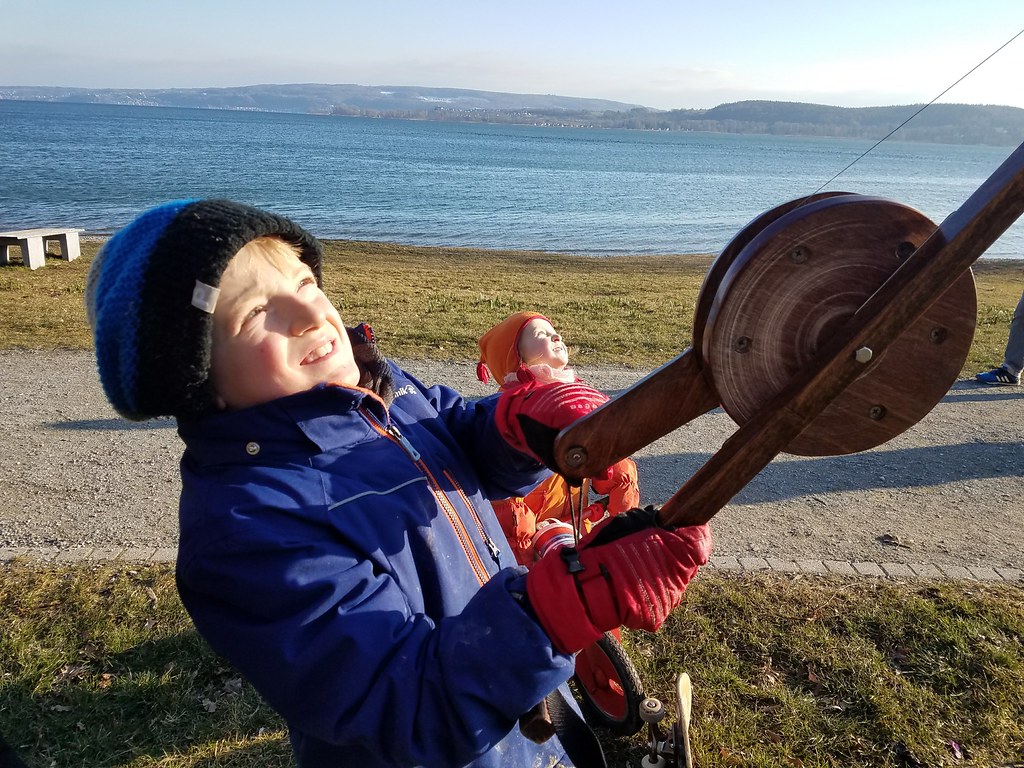 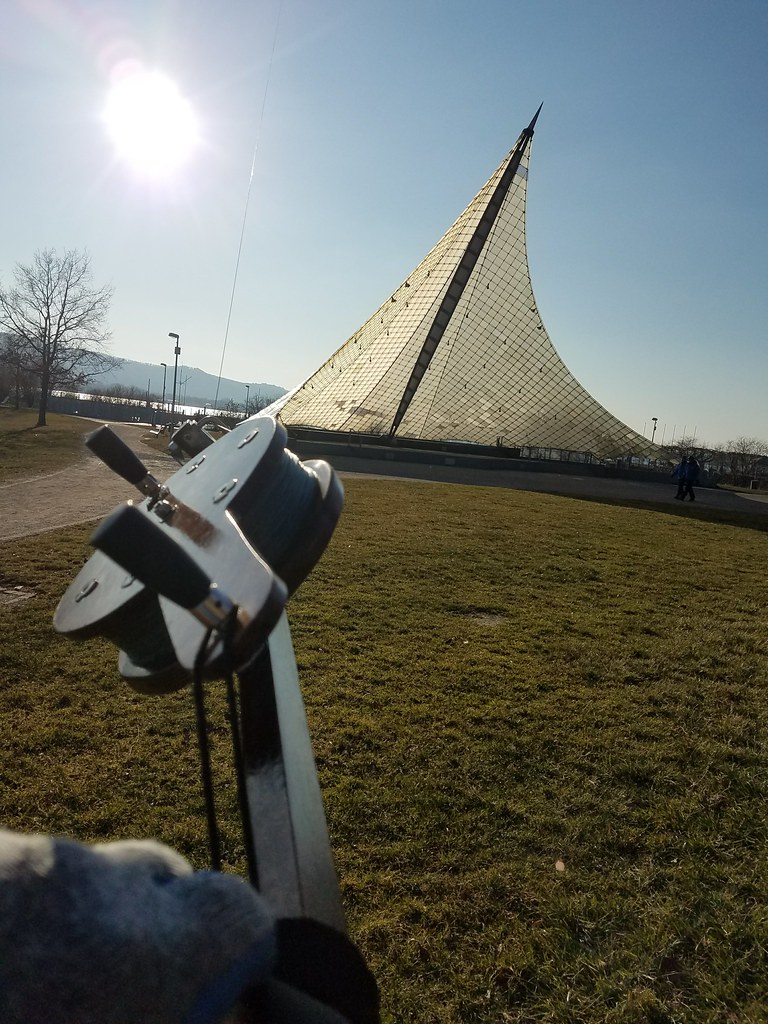 The cold won the race…The GoPro Hero 3 shooting continuous Kite Aerial Video lasted just 15 minutes…. The Sony faired better but fell victim to the batteries suppling the power to the CAMRemote controller…..which un know to me had a set of depleted lithium batteries installed…the Sony only collected 30 images …. All near the ground.

The next day I had a second opportunity to capture a bit KAP images after work. The hotel I was staying out was on the shore of Lake Constance. I had about 30 minutes of light left in the evening…. I swapped out the three lithium AAA batteries for new ones and proceeded to catch the wind blowing directly of the now frozen lake shore. I was surprised for how fast the water near the lake shore froze. Less then 24 hours of bitter cold wind had turned the watery lake front where ducks were swimming the evening before into a solid sheet of ice. The same ice-cold wind lifted the Levitation Light delta kite with the dynamic spreader into the evening sky above. The race between the cold wind and m batteries was on again. 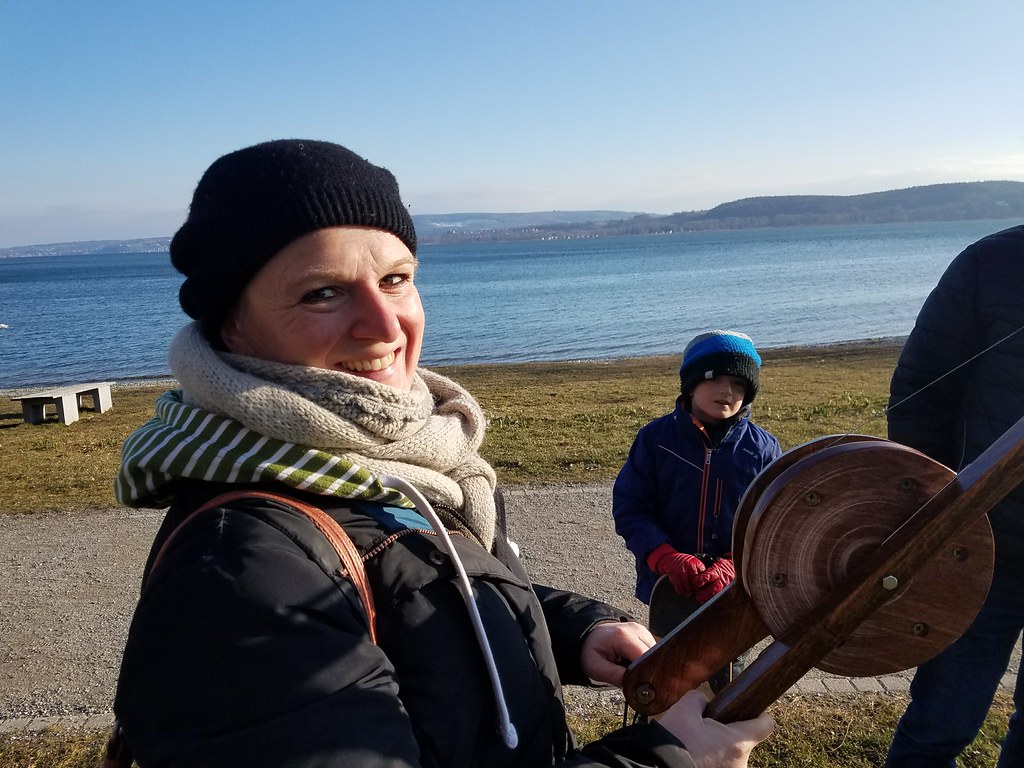 The cold wind won this race also. Turns out my new lithium AAA batteries for the CamRemote controller….were not so new….if fact…almost dead…..I got about 30 images from the Sony. The GoPro Hero 3 faired no better lasting only 5 minutes! Not much to show for after freezing my rear end off on the side of a frozen lake. The news claimed the bitter cold was the coldest in near 100 years….

A small bit of time became available on my last work day in Germany….which brings me back to where I started….between the scraggly snow covered trees…. and a twisted wire fence….between the steep snow covered hillside and the staunched opposing mountain tops a cold hard breeze scampered and swirled in the skites above…..

The location for this frozen KAP session was Hohentwiel which is an extinct volcano in the Hegau region of Baden-Württemberg in southern Germany The mountain is west of the city of Singen, 20 miles (30 km) from Lake Constance near the boarder with Switzerland. A fortress ruins sits on top of Hohentwiel, and dates back to 914 AD.

To catch these tricky mountain winds I first had to scout out a favorable position to launch the kite. The wind near the side of the mountain was almost still. I could sense powerful winds above but near the ground there was no wind at all. The search for wind required a bit of hiking across open fields with a touch of fresh snow that had dropped from the skies earlier in the day. Yes it was cold! I hiked on till I reached a slopping saddle formation on the side of a steep hill. I selected this spot based on the low sun angle and relatively free of the mountain wind shadow. The snowy hike was rewarded with a touch of wind in the air that also put a (cold) smile on my face.

The cold was intense with about a -10 C temperature. I had left my warm hat in the hotel room….thankfully I had a hood on my jacket. The Levitation light delta kite (sporting German colors) was quickly set up and attached to the Stratospool kite reel. A few minutes later the kite was flying high in the sky. I had stopped at a store on my way to pick up some fresh AAA batteries. I was unable to find any of the light weight lithium AAA batteries that I normally fly with and had to settle for the heavier alkalized batteries.

The Kite Aerial Photography (KAP) rig fitted with the Sony A6000 and the GoPro Hero 3 quickly followed the kite into the cold skies above. The Hohentwiel castle ruins were several hundred meters above my location…..I set the kite high in the sky. I carefully observed the KAP rig was steadily moving though its auto KAP pattern of tilts and horizontal movements. This confirmed the new batteries were holding up in the extreme cold.

This time the batteries outlasted my endurance for the cold and the wind. A short 40 minutes had past when I pulled in the kite as the sun was setting over the frozen landscape in Southern Germany.

The KAP shots were rewarding with several interesting subjects KAPtured during the session. 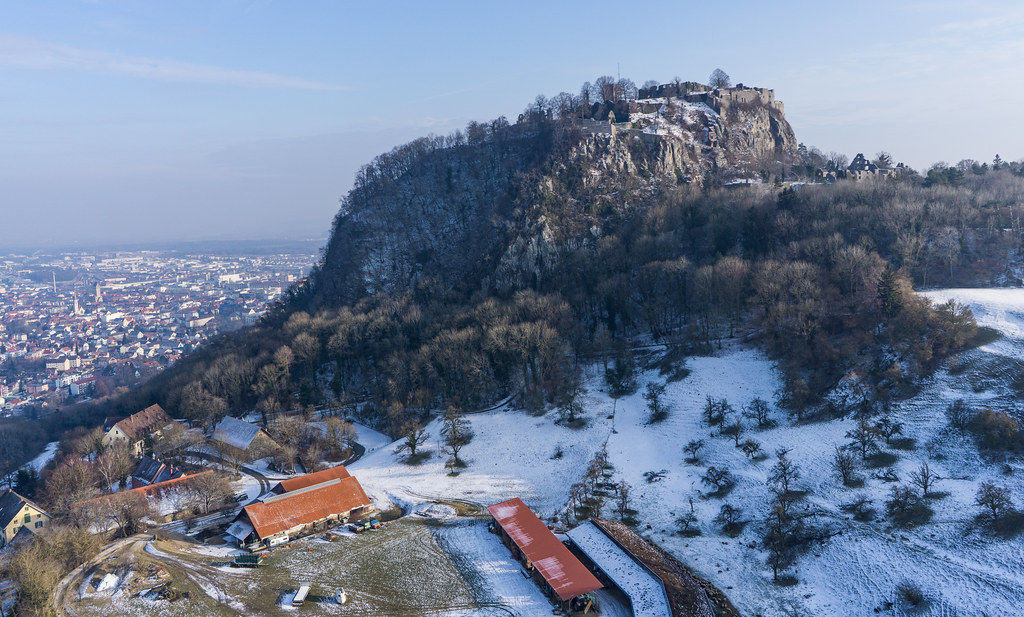 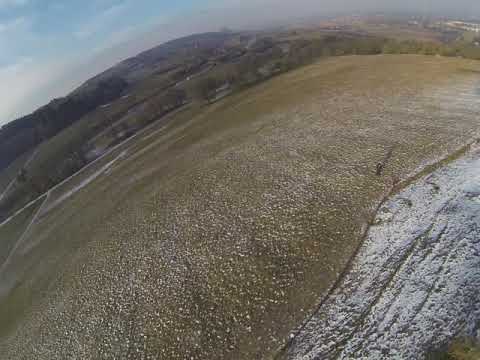 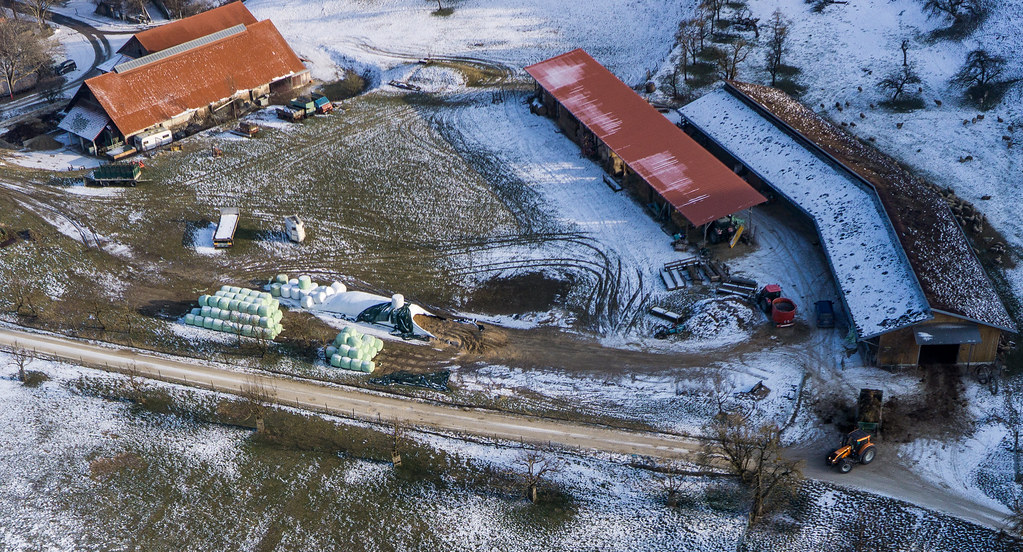 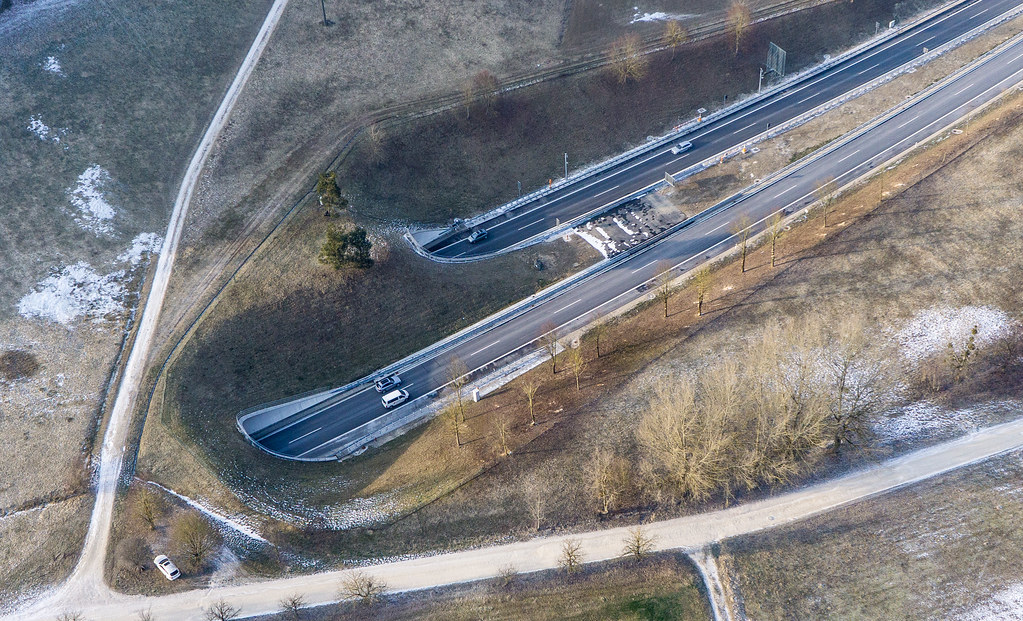