Wind Watcher
October 2016 edited October 2016 in Meetings
I exchanged the rain puddles of Portland for heavy sea spray and rain of Seaside Oregon, the site of the annual American Kitefliers Association (AKA).

I arrived Seaside late Monday afternoon after a 90-minute drive from Portland. The skies remained gray with sporadic rain moving through the area. Visibility was limited with the nearby Tillamook Head peaking in and out on the Pacific coast towering above Seaside.

Curiously I had the beach to myself….no rain puddles on the beach….

Lucky for the AKA they had reserved the Seaside Convention Center just a few blocks from the beach.

After checking in at the AKA registration station, I collected my kites, Stratospool, KAP gear and headed for the beach …. A windy, wet and gray affair.

There are some things you can only learn on an empty beach with light rain falling….while you watch rain drops …. run down your kite line ….. into your Stratospool…..putting a smile on your face and a bit of joy in your heart!

Thank goodness for my rain suit! 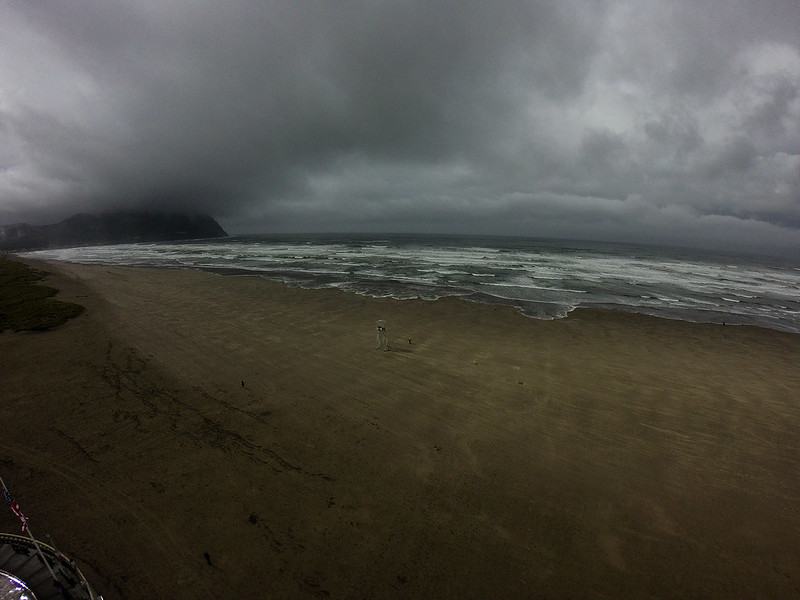 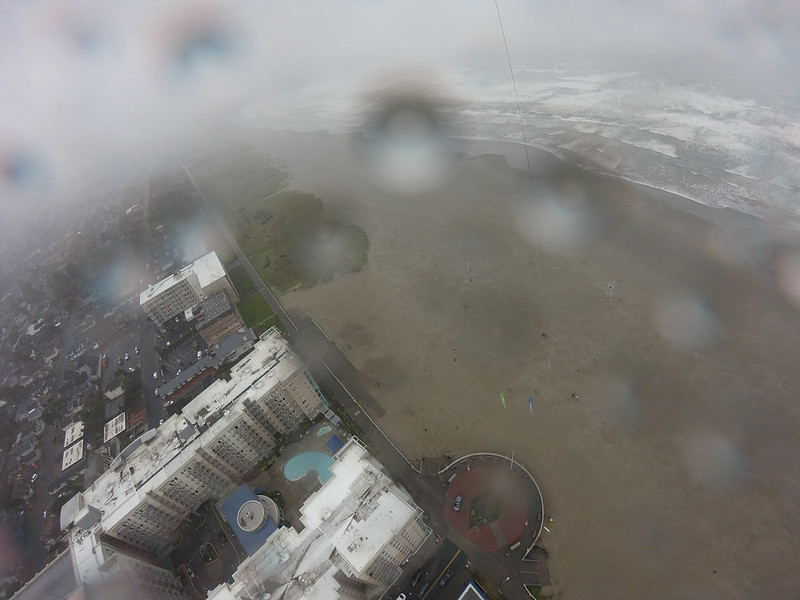 Ken Conrad (who I met earlier in the year at KAPiCA) and I hosted the KAP workshop. Title: “Drones and Kite Aerial Photography – What happens when a drone hits your kite line?”. Ken and I gave a basic introduction to Kite Aerial Photography (KAP) including kites, winders, kite line, KAP rigs and cameras. We then proceeded to review my experiments with drones running into kite lines (previously discussed on this forum here). About 10 people attended the workshop and we had a good number of questions from the attendees.

The plan was to move out doors for some KAP on the Seaside beach….but the rain convinced most … to stay indoors….leading to another empty beach KAP session …in the rain….which became the theme for the week.

To keep our spirits up Ken Conrad pulled out his digital wind anemometers and a digital strain gauge. Ken is a notorious electronic tinker. Ken configured a data logger to read force measurements from a hacked Chinese strain gauge along with a feed from anemometer sitting on top of a 8 foot pole. I attached a second light weight digital anemometer that Ken had attached to a Picavet cross to my ite line to measure wind speeds in the sky above. The goal was to gather data on pull (lift) force from different kites at different wind speeds measured both from the ground and on the kite line. See a few photos of the action below including a couple of charts provided by Ken. 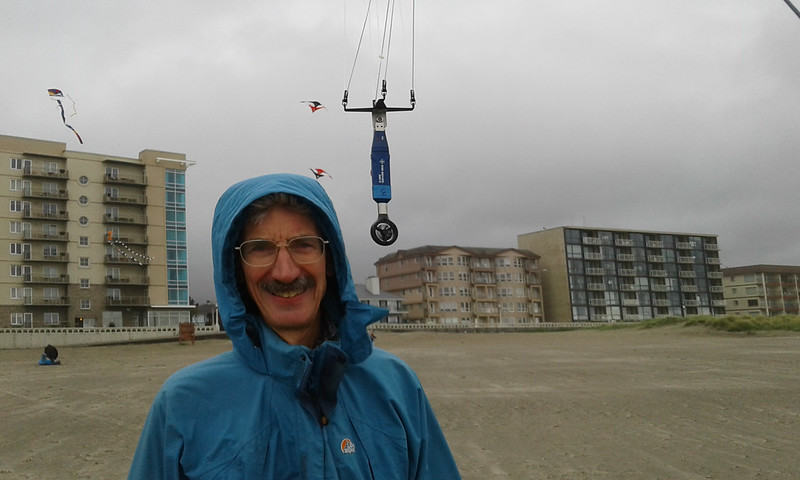 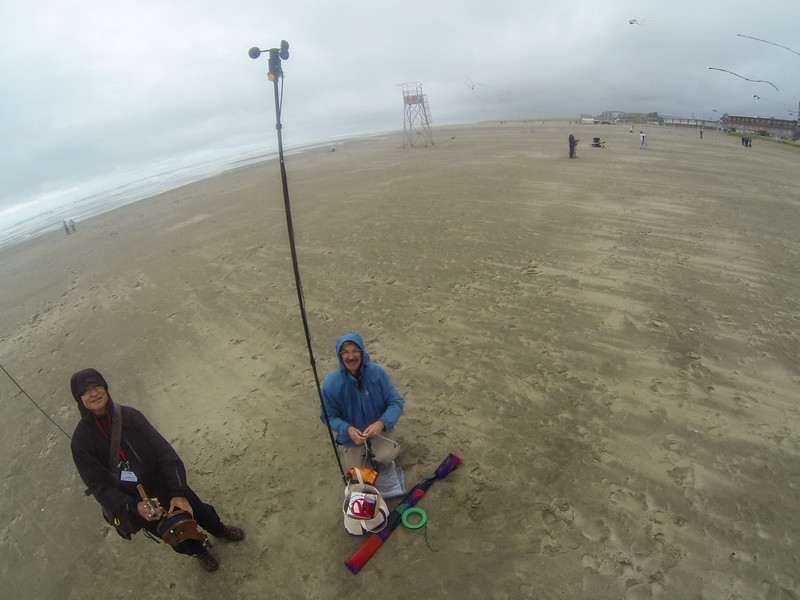 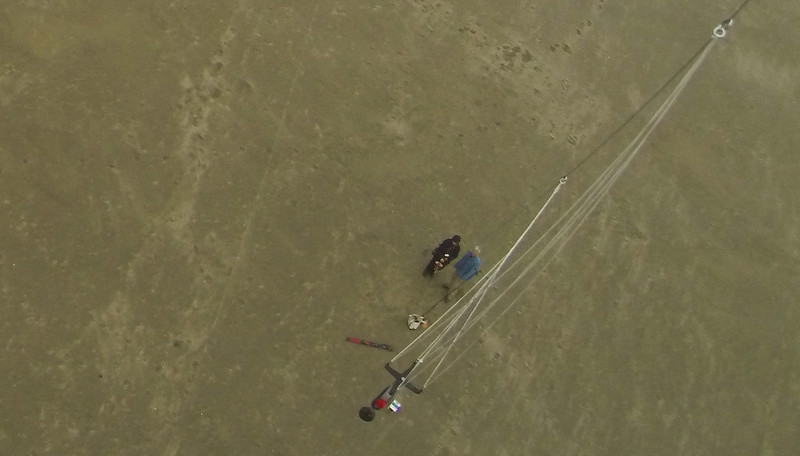 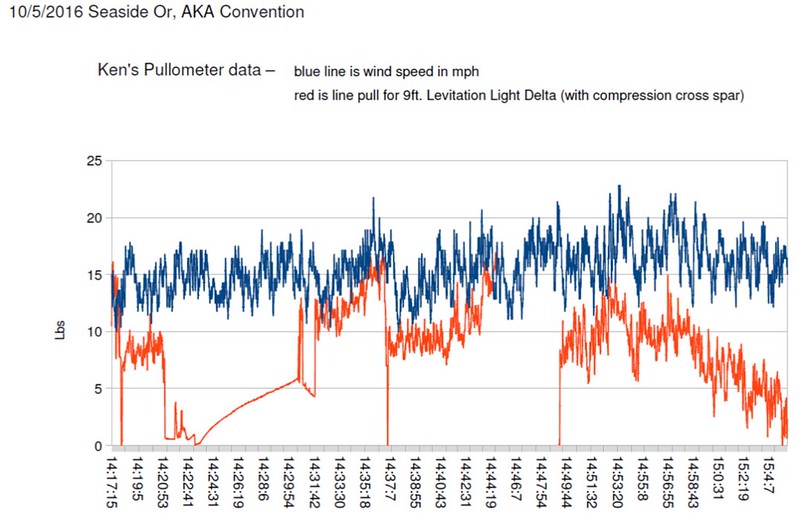 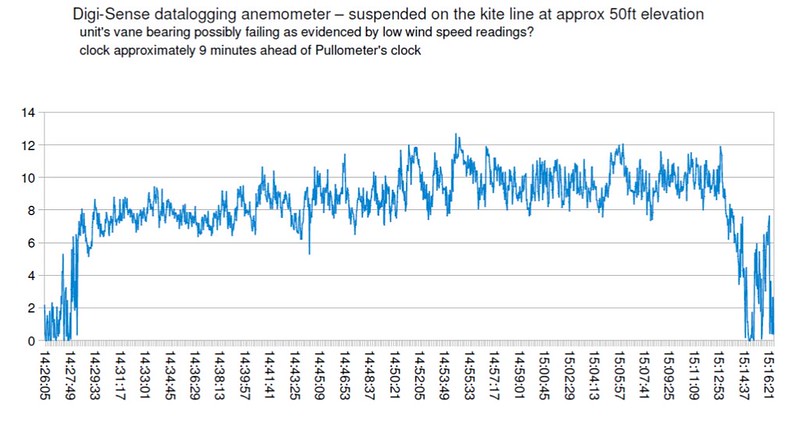 KAP Competition:
First the important stuff! The KAP competition and trophies were sponsored by Ken Conrad of Brookes.com (the supplier of all our special KAP gear). Ken is also the owner of Great Winds Kite Company.

The AKA Kite Aerial Photography (KAP) competition is composed of two categories:

Several KAPers who normally submit photos did not do so this year. Interest on the social media links was also down from previous years.

On the positive side the attendees at the AKA member’s choice convention banquet were very interested in the photos. Close to 100 people voted on the displayed KAP photos. 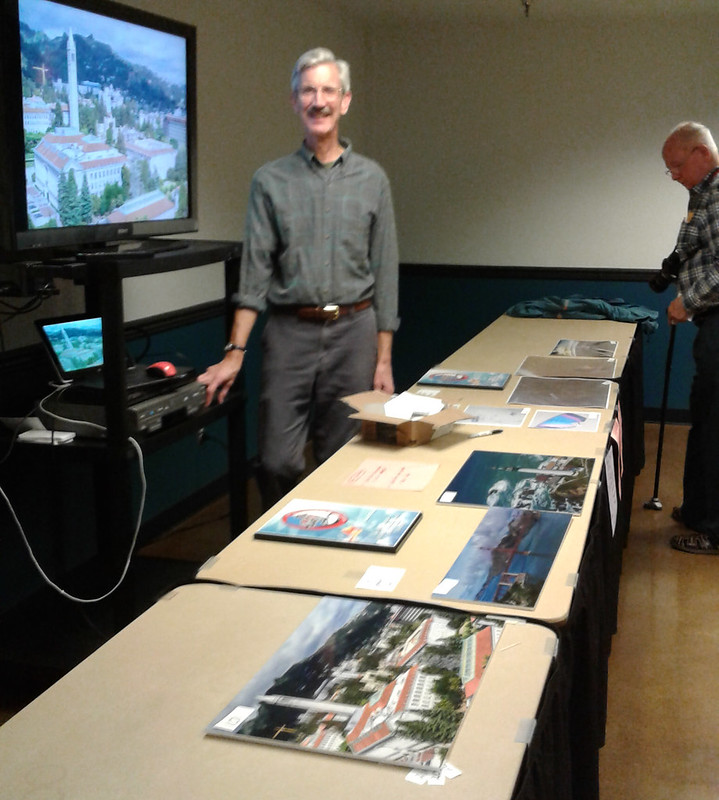 It’s a bit embarrassing but here are the results:

- Winner of the Open Kite Aerial Photography, George R. Lawrence award, is Jim Powers with a KAP shot of the Pinos Lighthouse – titled “Timeless”. The KAP shot was taken as part of the KAPiCA 2016 held in May 2016 along the California coast. 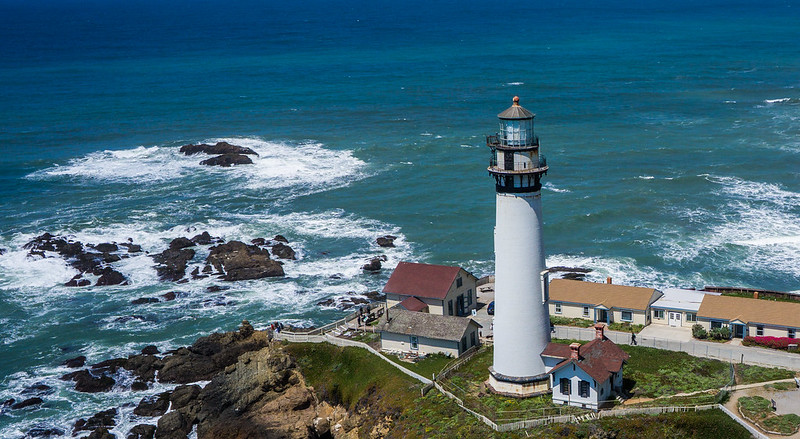 - Winner of the Members Choice Brooks Leffler Award, is also Jim Powers with a KAP shot of a novel kite by French kite master Loik Lamalle. The KAP shot was titled “Soul Healer” and was taken earlier in the week on the beach in Seaside Oregon during a brief break in the rain! The sun popped out for about 10 minutes! Loik had just made the whimsical kite the week before. The kite few surprising well. 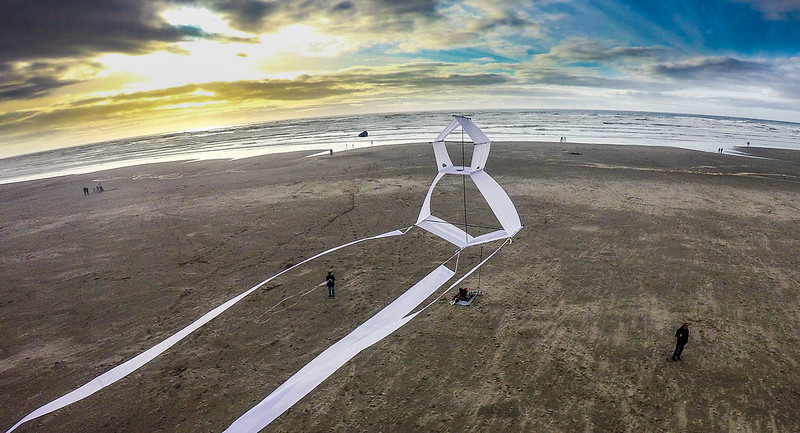 The rest of the KAP entries can be found in this flickr album.

The vote tally is recorded below: 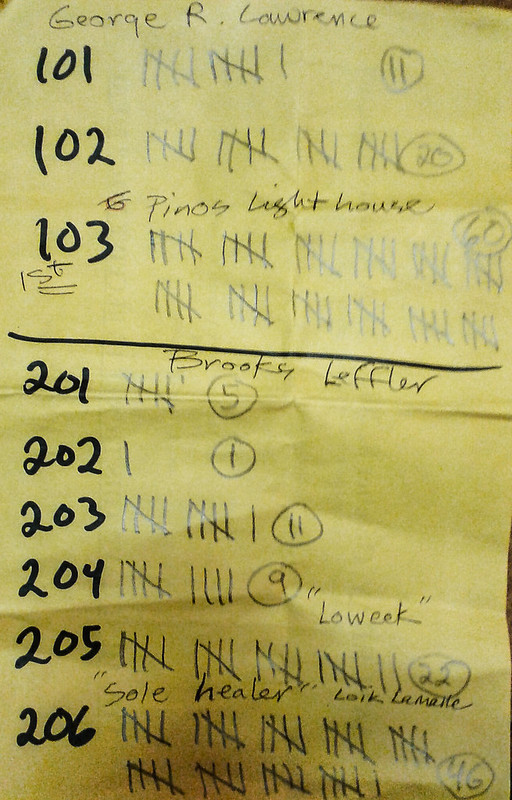 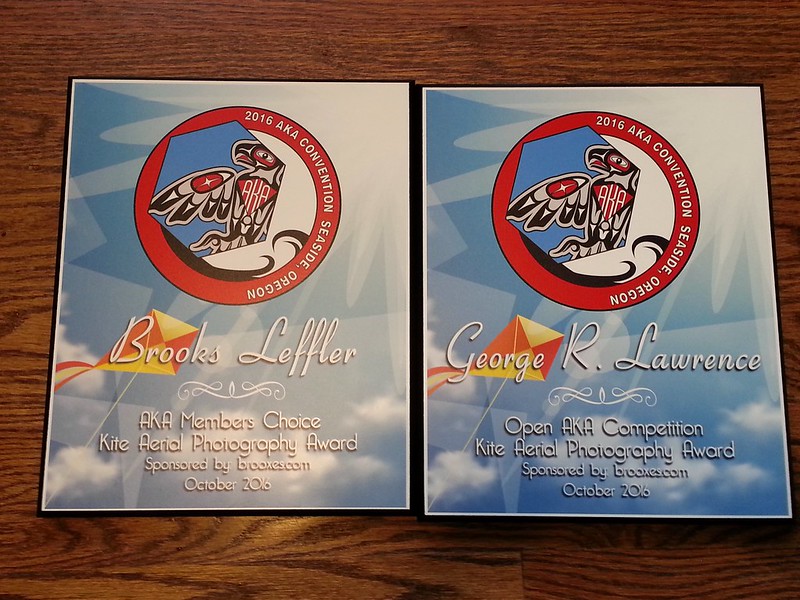 KAPnics – group of KAPers travel to local venues to put kites in the air……got rained out.

The plan…was to organize daily KAPnics with local KAPers along the Oregon and Washington Pacific coast. The extreme weather with near gale force winds and steady rain forced many of the kite events indoors…… We did get a few KAP sessions in on the beach in Seaside Oregon. The turnout was low.

Not discouraged by the weather….I did manage to get in 9 KAP sessions stretching from Long Beach Washington in the north to Seaside in the South. My favorite shots were in the small port town of Astoria Oregon. Seven of the nine KAP sessions were in the rain. I have been flying kites and taking pictures in the rain for years. I am always surprised by what show up in the photos.

Looking forward, the AKA announced the 2017 AKA convention and KAP competition will take place in Ocean City Maryland October 8-14, 2017.